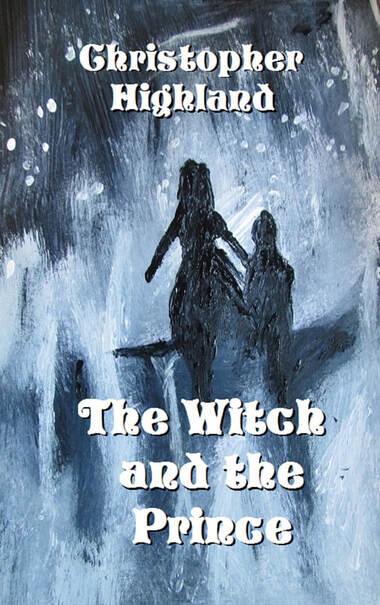 In February 2020 WCP Enterprises Publishing released its first non-William Pattison book. The book, which is titled The Witch and the Prince is the work of William Pattison’s protégé Christopher Highland. Now, Christopher Highland has joined WCP Enterprises to talk about his fantasy/horror novel….
The tall, slender, figure of Christopher Highland enters and sits in the chair in front of the interviewer.
Christopher, who is currently sporting a short beard, nervously adjusts his iconic glasses on his nose. His raven hair is a bit longer than his photo that appears on his popular podcast Full Spectrum Horror thus giving him a look more like either a Joe Hill or young Stephen King than his usual Harry Potter-like appearance. His light blue button down shirt, blue jeans, and tan loafers add to this.
WCP ENTERPRISES: Greetings, Christopher.
Christopher Highland: Hello.

WCP ENTERPRISES: What inspired you to write this story?
Christopher Highland: Desperation, and redemption.  The witch character first came to me in college.  I had to write something fast in class, and she came to me in a flash in my head. I only wrote part of the first chapter that day, and the basis for the last chapter the next year in another class, along with the basis for two other chapters in another class. Almost seven years would go by before I was ready to write the full novel after fleshing out the outline.  They earned positive responses, and I felt they could be improved upon, and of course, they were.

WCP ENTERPRISES: Why did you choose Michael and Rose as the main characters?
Christopher Highland: They’re the most interesting characters in the novel. Michael was based on me, but Rose was something or someone that came from I don’t know what or where. She came to me, and I was the conduit.  Part of her is also based on someone I used to know.

WCP ENTERPRISES: It’s been said that The Witch and the Prince is a contemporary fantasy with horror elements. What are your thoughts on this?
Christopher Highland: I didn’t want to write a normal fantasy novel.  Stories have a mix of genres that overlap with the main theme that is used.  Horror is an underlying theme overall therein, but it’s obvious at times.

WCP ENTERPRISES: The characters of Michael and Rose have a close relationship. Could you tell us about it?
Christopher Highland: It’s rather a love/hate relationship. It starts out as fear, but grows into friendship. That fear never really goes away. It rises and falls, lingering in the background, or in the forefront.  Also, there is love. A love between a mother and son, and a man and woman.

WCP ENTERPRISES: How did you handle the scenes where your witch, Rose, had to deal with the human realm?
Christopher Highland: She was living in her brownstone in the Chicago suburbs for many years. How long exactly, who can say. So, it was easy for her, but I knew she was more at home in the other dimension.

WCP ENTERPRISES: How much thought did it take to create your version of the fairy realm? Give us your thoughts on world building.
Christopher Highland: I’m not quite sure how to answer that. I didn’t want to spend too much time with that. There’s only three chapters that deal with that, and I didn’t want to bog down the reader or characters with it, so I minimized things. I wanted to write something that’s accessible to those who are not obsessed with the genre.

WCP ENTERPRISES: What makes your vision of the fairy realm unique?
Christopher Highland: I apply the “less is more” philosophy.

WCP ENTERPRISES: The Witch and the Prince is your first published novel. What are your feelings in regard to having your book finally in print?
Christopher Highland: It’s bittersweet. Many people who have read my work over the years are not alive, and not around.  Almost twenty five years it has taken to get to this point. I never thought I would get here.  So, it’s bitterer than anything else.

WCP ENTERPRISES: How is your way of writing different, say from Stephen King or George R R Martin?
Christopher Highland: I don’t overwrite.   I have a personality that is vastly different from either of those writers, which flows into my writing.

WCP ENTERPRISES: Are you positive or negative in regard to your view on humanity? How does this affect your writing?
Christopher Highland: I was overflowing with angst when I was younger. It’s tapered off since then, but only to a point. So, there’s been somewhat of a balance.  There’s been individual cases that’s made me feel positive about humanity, but they’ve been few and far between regarding my overall experience.  Humanity, and modern civilization, does not fill me with a vote of confidence.
Back